The 22 LR is no doubt the king of the rimfire cartridges. And long live the king. But Tim “The Tool Man” Taylor very succinctly summarized what many people want – not just from their power tools, but also their ammunition – whenever he uttered his famous catchphrase:

When you want increased muzzle velocity, a flatter trajectory, and more energy to deal with varmints and predators downrange, you can turn to one of the magnum rimfire cartridges. The two most popular of these are the 22 Winchester Magnum Rimfire (22 WMR) and the 17 Hornady Magnum Rimfire (17 HMR).

But which of these rounds truly offers MORE POWER? In this article we’ll compare the ballistics, energy, and other performance features of the 22 WMR vs 17 HMR. Our hope is we’ll help you pick the better ammo for bagging critters.

Winchester introduced the 22 WMR in 1959 in order to serve shooters seeking a rimfire round accurate up to 125 yards and capable of taking game as heavy as 20 pounds. The 22 WMR quickly became popular following its release as Savage, Ruger, and Smith & Wesson began producing rifles chambered for it. Winchester based the 22 WMR on the 22 WRF, a round which had been introduced in 1890 as an improvement over the 22 LR, but which had gone obsolete after improvements in propellant technology enabled the more common and less expensive 22 LR to perform even better.

These names all refer to the same thing with the same cartridge size and ballistics.

The 17 HMR was introduced by Hornady in 2002. They based their work on wildcat cartridges that had been developed to replicate the performance of the 5mm RFM. Upon the 5mm RFM’s discontinuation in 1974, it had been the fastest rimfire round in existence. Hornady chose to base their new round on the 22 WMR. They deemed the 5mm RFM’s case too unusually shaped and saw 22 LR’s case as too weak.

By necking down a 22 WMR to seat a smaller bullet, Hornady succeeded in creating a round with a faster muzzle velocity. 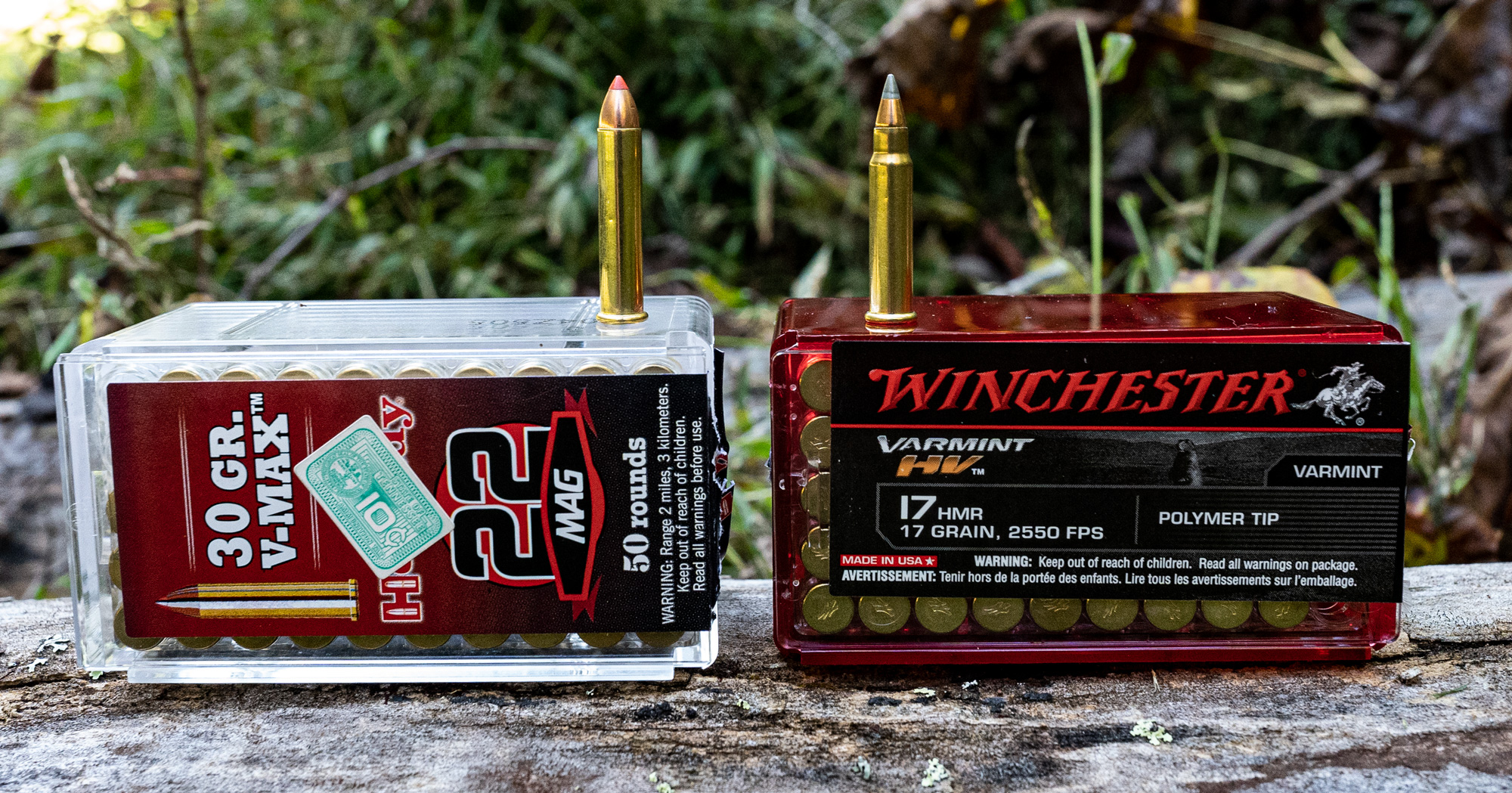 Before we compare the ballistic performance of the 22 WMR and 17 HMR, let’s see what we can gather about them based solely on their physical dimensions.

The primary difference between these two rounds is apparent right off the bat: The 17 HMR has a smaller caliber bullet. This is bound to impact its ballistic performance. However, because the 17 HMR’s bullet is so much smaller in diameter it can also get away with being a whole lot lighter. The majority of 17 HMR bullets weigh 17 grains. You might find them available in 15.5 and 20 grains as well.

The 22 WMR, on the other hand, typically has a 40 grain bullet. There is some variance here too though. You will often find bullets as light as 30 grains and heavy as 50 grains for sale.

You’ll also notice that the two rounds have very similar case dimensions and overall lengths. The 17 HMR’s case has a shoulder because it bottlenecks to seat its smaller diameter bullet. Otherwise, the two round’s cases have virtually identical capacities. Indeed, they can share an identical propellant charge. What this means is that the 17 HMR is poised to offer a significantly faster muzzle velocity for its sheer virtue of having a lighter bullet.

We selected representative cartridges by Hornady, Winchester, and CCI to compare these two rounds’ ballistic performance. The V-MAX is a popular polymer tipped bullet for varmint hunting, and the FMJ and TMJ, while technically different, offer interchangeable ballistic properties.

These data demonstrate the value of a lighter, higher velocity bullet. The 17 HMR bullet offers a significantly flatter trajectory than the 22 WMR, rarely rising by more than 5” en route to a 200 yard target. The 22 WMR’s bullet must rise by over 8” to achieve the same range. The 17 HMR bullet’s higher ballistic coefficient (essentially a measure of how effectively a bullet overcomes air resistance in flight) also contributes to its flatter trajectory, as well as its greater immunity to wind drift downrange.

It should be noted that the 17 HMR’s effective range is about 150 yards, and the 22 WMR’s is 125 yards. We opted to compare their performance at 200 yards to better demonstrate the difference in their trajectories. Even if you were firing these rounds at more conventional ranges, however, you would still see a flatter trajectory out of the 17 HMR, which does indeed make it a little easier to aim in the grand scheme of things.

The energy a bullet can transfer to its target is dependent upon two factors: velocity and weight. While the 17 HMR boasts a superior velocity at all ranges, the 22 WMR is able to deliver greater energy throughout either round’s effective range thanks to its far heavier bullet.

Energy is only one factor that determines how deadly a bullet performs upon finding its target. There is also sectional density (how effectively a bullet can penetrate soft tissue) and terminal expansion to take into account. But in terms of pure energy, the 22 WMR offers greater stopping power than the 17 HMR. Whether that admittedly small energy advantage will matter while hunting game as small as varmints is debatable.

The 17 HMR’s higher ballistic coefficient and resultant ability to retain greater velocity downrange can enable it to edge out the 22 WMR’s energy over very long distances. This is a hollow victory. Actually hitting a 200 yard target with a 17 HMR is a feat few of us will ever achieve. (Maybe you will pull it off if you learned how to shoot at Camp Lejeune. The rest of us ham and eggers would do well to keep it at 150 yards.)

To compare the recoil energy of the 22 WMR and 17 HMR rounds detailed above, let’s assume they all have 5.6 grains of propellant. Let’s also use a 5.5 lb Remington Model 597 for this exercise since it’s available chambered for either cartridge.

In summary, with its heavier bullet the 22 WMR can generate over double the recoil energy of a 17 HMR.

But here’s the thing: These rounds’ recoil energies are so drastically low you’ll feel virtually zero kick while firing either. Even if you always prefer a lower recoil round, there is no reason to favor the 17 HMR over the 22 WMR!

The 22 WMR beat the 17 HMR to the market by 43 years. That’s not a small head start, and as such you’re going to find a lot more firearms chambered for the 22 WMR than you will for its successor. 22 WMR ammo is more available as well, but you ought to be able to find either easily enough. (Assuming we aren’t all suffering through an ammo drought together.)

Following its introduction, 17 HMR ammo was significantly more expensive than 22 WMR. But now that manufacturers have streamlined production and demand for 17 HMR has risen, the two rounds are priced on par with one another.

Interestingly, a good magnum rimfire round costs about the same as a target grade 223 Rem. You might pay twice as much for a proper hunting 223 cartridge. By doing so, you’re going to benefit from a lot more power – not to mention versatility. If you were only going to own one firearm, you would do better to get an AR-15 than a rifle that’s specialized for varmint and predator hunting.

The 17 HMR consistently offers a higher ballistic coefficient than the 22 WMR. This combined with its substantially faster muzzle velocity grants it a flatter trajectory. Despite this, the 22 WMR’s heavier bullet enables it to transfer greater energy at any point throughout the two rounds’ effective ranges.

In effect the 22 WMR vs. 17 HMR debate boils down to which you prefer: accuracy or power.

If you value a flatter, easier to aim trajectory, then the 17 HMR is your boy. If you believe having an additional 40 ft lbs of energy to deliver at 50 yards could turn a hunt in your favor – or if you’re hunting larger game such as predators – then the 22 WMR will indeed put more power at your fingertips.