What are the best gun movies? They aren’t just movies that have guns in them. If that was the case then Titanic would be a gun movie instead of just excruciatingly long.

A “gun movie” can’t just show a lot of people using guns, either, because that describes about 95 percent of movies ever made. No, a gun movie has to be about guns, or at least feature a gun in such a neat way that it’s the main thing we remember about it.

It’s easy to pick out the unrealistic stuff in gun movies. We always notice whenever our hero fires a revolver more than six times, or a .50 cal miraculously produces no recoil at all. But if you can shut your inner purist up for a couple hours, we think you’ll enjoy our favorite gun movies just as much as we do. 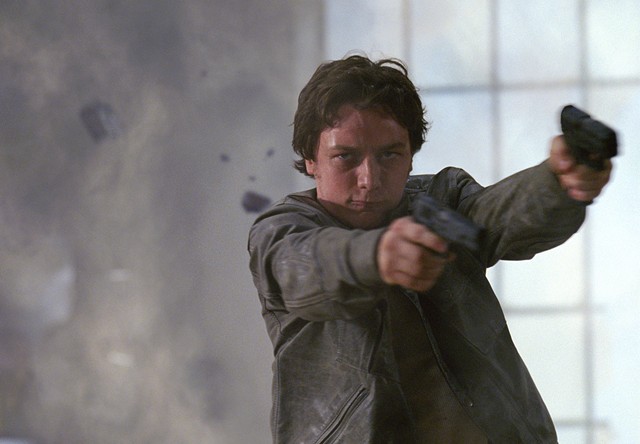 Let’s start this list off with what is arguably the most unrealistic representation of firearms ever presented in cinema. Wanted is the story of a downtrodden young man who one day discovers he is rich and has superpowers. We’re sure most people have never had this fantasy before.

Our hero soon learns how to “curve bullets,” where he fires while swinging his pistol around his head like he’s winding up to throw a boomerang. This makes for some very nice slo-mo shots where bullets follow elegant, snaking trajectories into bad guys’ temples. We just shudder when we imagine how many troglodytes have been thrown out of gun ranges for trying out bullet curving in real life.

The year 2000 was ups and downs for Guy Ritchie. On the one hand he made Snatch, a stylish heist movie full of intrigue and cockney jargon. On the other he married Madonna.

A character named Bullet Tooth Tony makes Snatch a gun movie. At one point the poor, innocent ruthless bounty hunter is just trying to enjoy a glass of room temperature ale when he is accosted by three street toughs. Tony calmly sets down, makes some very pointed comparisons between the toughs and human reproductive organs, and then observes that while their guns have the word “REPLICA” engraved on their slides, his own slide reads “DESERT EAGLE POINT-FIVE-OH.” We have to applaud Tony’s ability to deescalate a tense situation, as well as his uncanny ability to fire said Desert Eagle with zero recoil. 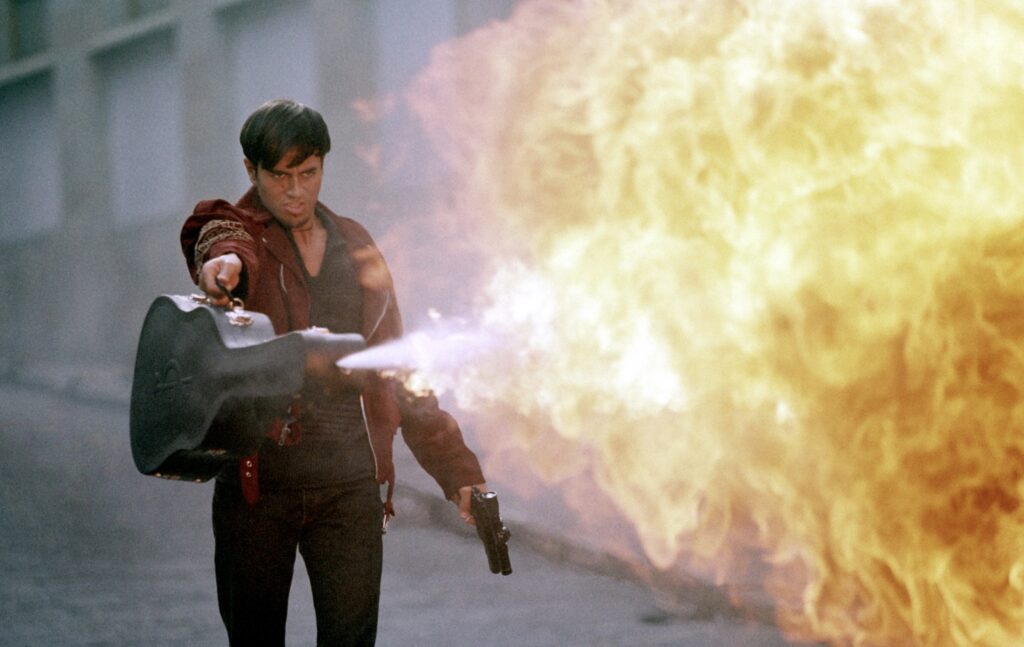 Once Upon a Time in Mexico is the perfect example of a gun movie because we remember exactly one thing about it: a gun. A flamethrower, to be exact, sneakily built into a guitar case so that Enrique Iglesias could flambé some hapless baddies. “FWOOOOSH!”

We don’t know what the laws are down Mexico way, but flamethrowers are mostly legal here in America. Only Maryland bans them outright (must be a heck of a reason why), and California is surprisingly lenient on the nightmarish implements of destruction. It’s not the sort of weapon we’d recommend for home defense – it would kind of defeat the purpose – but it’s good to know we have the freedom to carry flamethrowers without having to dress them up as mundane objects.

Speaking of dressing up weapons as mundane objects, the James Bond classic The Man with the Golden Gun features one particular firearm that would make any TSA agent start shrieking like a crazed bonobo if they were qualified enough to actually find it.

The titular Golden Gun stealthily breaks down into a pen, cufflink, cigarette case and lighter. The weapon fired a single 4.2mm bullet, which itself was made out of solid gold “for maximum damage.” There is some logic to this. Gold is nearly 70 percent more dense than lead, so if accelerated to the same velocity it would penetrate soft tissue a whole lot deeper. The only setback is that a solid gold bullet would make a single round of 9mm cost over $500. 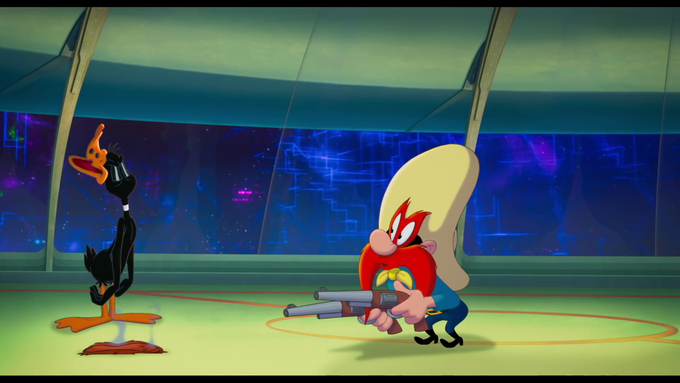 Space Jam isn’t a gun movie per se, but it does illustrate something interesting about the times we live in. Just a few years ago it was considered good family fun to show Elmer Fudd and Yosemite Sam shooting out a guy’s teeth during a basketball tournament. But in 2020 HBO announced Fudd and Sam would no longer be depicted carrying guns in their new Looney Tunes reboot. Kind of makes you wonder why they’d even bother having a hunter and a cowboy in the cartoons at all.

This was actually a children’s movie about a puppy and a kitten finding their way back home. There are no guns in it, but it does make us cry every time. 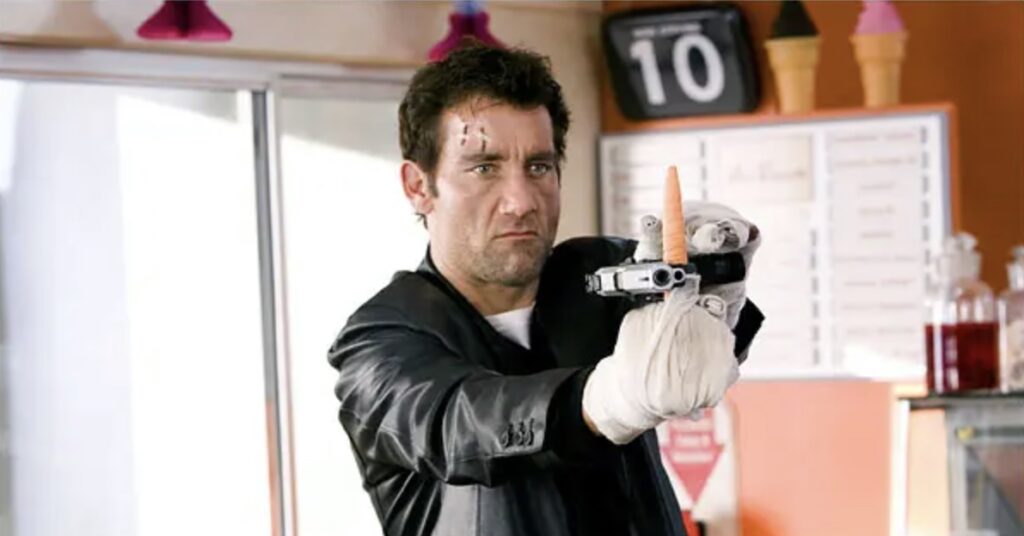 The New York Times called it a “worthless piece of garbage” so you know it’s worth a look!

Clive Owen does just about every stupid thing with a gun that it’s possible to do in Shoot ‘Em Up. He springs around gunfighting while wearing a baby in a chest carrier. He engages in a dogfight while falling from an airplane. And in the movie’s big, climactic finish he places live rounds of ammunition between his fingertips and then sticks his hand in a fire in order to kill Paul Giamatti.

Firing a weapon a couple of feet from a baby’s head is not advised by the NRA. But could you pull off the hand-in-the-fire trick in real life? No. A cartridge placed in a fire will explode as sure as sunshine, but without a gun’s chamber to contain all that pressure it has no chance of actually firing its bullet. Its case will simply split open like an overenthusiastic tick on a dog’s belly and that will be that.

Plus the fire would hurt your hand. 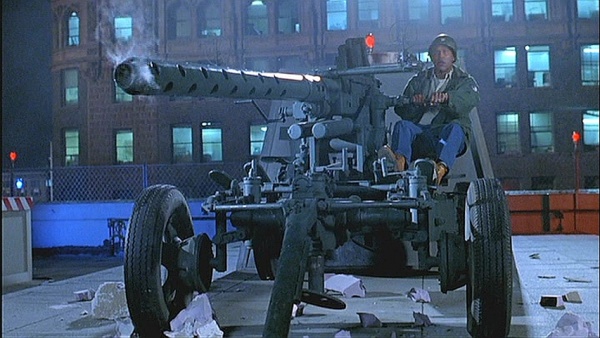 This classic Leslie Nielsen flick has one of the best gun-related gags in movie history. During the big rooftop shootout scene O.J. Simpson (of football and double homicide fame) adds more and more attachments to a handgun until he is finally shown manning a Bofors 40mm anti-aircraft autocannon. We always think of good old O.J. whenever we go to the range and see an AR-15 enthusiast with so many geegaws on his rifle that it looks like a coral reef.

What do you think? Did we forget to put any of the best gun movies on our list? We’ve talked about the guns in a few other films that might come to mind. You know the movies. We’re talking Die Hard, Dirty Harry, as well as the Terminator and Rambo series. If there’s another we missed, please leave a comment below pointing out how boneheaded we are for leaving out your favorite and we’ll be sure to update our list if we feel like it!