What is the best ammo for your AK47?

Perceive a need, then find the solution -- this is how any invention comes to be, and the AK-47 is no exception. When Mikhail Kalashnikov was wounded during the Battle of Bryansk in 1941, he understood part of the cause: The Germans had him and his countrymen outgunned with the Sturmgewehr 44, which combined a machine gun’s rapid fire with a rifle’s accuracy. Furthermore, whereas every German could tote such a fearsome weapon, the Russians had to share their rifles.

That wouldn’t do, so Kalashnikov hit the drawing board. The fruit of his labor, the Avtomat Kalashnikova, would chamber the same 7.62×39mm cartridge that the Russians’ SKS carbine and RPD light machine gun utilized, but at once was fully automatic, could be mass produced according to Russia’s manufacturing capabilities in the late 1940s, and featured a long stroke gas system which proved reliable under even the most adverse conditions.

The AK-47’s low cost and ease of manufacture, combined with its potency in combat, rapidly gained it popularity. It has been manufactured in nearly three dozen countries, from Ethiopia to Vietnam, and as many as 150 million AK-47s and its derivatives have been produced to date. So successful had Kalashnikov been in inventing a rifle that he intended as “a weapon of defense and not a weapon of offense,” but which saw endless use in warfare, that he expressed remorse late in his life. So it goes.

What Ammo Does An AK47 Use?

Whereas any discussion of the AK-47’s rival, the AR-15, must at least mention the fact that the latter can chamber a variety of calibers, the AK-47 is a far simpler creature. If it is an AK-47, its ammunition is 7.62×39mm. The rimless, bottleneck cartridge first went into production in 1947 as the M43 with a 123 grain projectile. The M43’s tapered shell casing made it easy to feed and extract (hence the AK-47’s distinctive curved magazine), although its bullet’s inclusion of a large steel core meant it was nearly incapable of delivering heightened damage via fragmentation. The steel core has since been largely done away with.

Today’s 7.62×39mm is available in a variety of options. Several European manufacturers offer the caliber with a steel casing and Berdan primer, which at once makes it far more economical than any brass cased round. There are drawbacks to steel cased rounds, however. As a rule they are not reloadable, they have a tendency not to obturate as well as brass, and they may not feed and extract as dependably as brass cased ammunition. That last issue is often handily addressed by the addition of some lacquer or polymer coating which improves the casing’s lubricity. Still, that steel cased 7.62×39mm rounds boast nearly half the price of brass cased ones will always make them an attractive option, and steel cased military surplus ammo, especially in sealed spam cans, is ubiquitous.

There is no deficit of options for brass cased 7.62×39mm ammo, of course. You can find it from both American and European manufacturers, ranging from range cartridges with simple FMJ projectiles to rounds with more advanced bullets that better suit the AK-47 for self-defense and hunting. Federal’s Fusion line of ammunition offers the 7.62×39mm with a soft point projectile and bonded core and jacket, enabling it to create the deep and wide wound channel that is effective for felling deer, and Winchester’s PDX1 Defender features a smooth cycling nickel plated brass casing and split core hollow point projectile that makes an AK-47 an especially potent weapon for defense -- just as the rifle’s inventor had intended.

Whichever type of 7.62×39mm cartridge you opt for, its approximately 2,400 fps muzzle velocity and wide, heavy bullet are going to make you a formidable force indeed. And while an AR-15 is by no means not a fine weapon, there will always be something about an AK-47’s graceful contours and handsome walnut furniture that earn it a place in any shooter’s heart. If you haven’t fired the rifle yet, see that you do get to experience its RAKKA-CHAKKA-CHAKKA soon. It would be an understatement to describe it as merely satisfying. 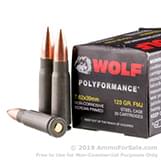 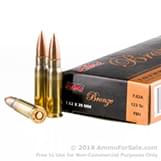